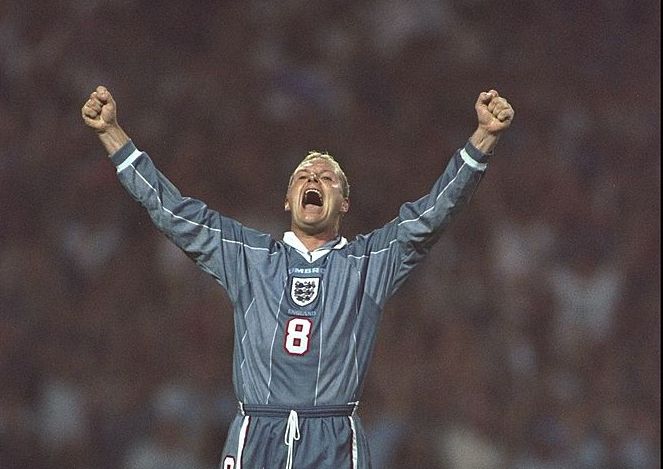 Every football fan in the country will think they know the story of Paul Gascoigne. From the tears in Turin to the trashing Glenn Hoddle’s hotel room via his heroics at Euro 96.

For many, Gascoigne was the face of 90s Britain – talented and flawed in equal measure and a regular fixture on the front and back pages of the newspapers.

There have been plenty of things written and said about him over the years – including in his words in the 2015 documentary Gascoigne (opens in new tab) – but this new documentary, simply called Gazzato be shown on the BBC, is different.

While Gascoigne gave his blessing and support to the documentary, as well as family archive footage, he is not interviewed for the new two-hour special and only seen in the opening and closing scene fishing on a lake in Hampshire.

Gazza charts the 10 year period from Gascoigne breaking through at Newcastle in 1988 through to the end of his international career in 1998 and through archive footage, and contemporary interviews from those there at the time chart the highs and lows both on and off the pitch.

While Gazza doesn’t necessarily break new ground or uncover any new revelations, what it does do very well is provide perspective and context to what Gascoigne was going through on an almost daily basis.

The documentary starts in the late 80s when we are introduced to the cheeky and charming working-class footballer from Newcastle. His talent soon led to a move from the North East to Tottenham where he became the highest paid player in the country earning £4,000-per-week.

Not long later and Bobby Robson comes calling and hands Gascoigne his first England cap and that is when the ‘Gazzamania’ roller coaster really starts to get going.

His performances at the Italia 90 coupled with his public showing of vulnerability with his tears after the defeat by West Germany endeared him to the British public even more and turned the then 25-year-old player into an international star.

On the back of that World Cup he signed a deal with The Sun newspaper for £250,000 for one year and as journalist Neil Wallis says: “As far as we were concerned we were buying him body and soul. a huge figure head in the paper and it worked very well.”

It may have worked out well for The Sun but the warning signs for what lay ahead for Gascoigne were apparent early on.

Wallis added: “We started to notice, pay enough money and Gazza would turn up at the opening of an envelope

“There was nobody who was interested in Paul Gascoigne’s welfare. We were worried because we’d got so much money invested with him. How long could this last?”

It was the start of a volatile relationship between Gascoigne and the tabloid press.

As another ’90s icon, Oasis songwriter Noel Gallagher, says in the 2016 documentary Supersonic (opens in new tab) about his band and their relationship with the press: “The day that it crosses over into the tabloids and stays there for years, then you have gone to the dark side. The clock is ticking then.”

And that appears to be true for Gascoigne too, not that he didn’t play a big role in his own downfall, but the tabloids certainly didn’t help.

One thing Gazza is not is a fluffy, re-writing of history that focuses on the good times, in fact the two hours his struggle with alcoholism as well as the times he admitted to domestic violence against his ex-wife Sheryl receive plenty of attention and airtime .

Sheryl was approached for an interview by the documentary team, but declined. Director Sam Collins said it was very important for them to “try to tell her side of the story, with the material available”. And the documentary certainly does not shy away from the unsavoury incidents.

In the first episode, the traumatic story of how an 11-year-old Gascoigne held nine-year-old Steven Spraggon in his arms as he died after being hit by an ice cream van while the pair were going to the shops.

The family tell of how Gascoigne used to blame himself for Steven’s death and as a result used to wake up in the night screaming and developed a stutter.

Fast forward to when he is playing for Glasgow Rangers in 1995 in episode two, and Gascoigne is walking round his big empty house and says: “I don’t like being on my own, when you are on your own you think a lot. When I was little things happened to me so when I’m on my own I think about those things.”

While none of these excuses the way he behaved, it provides some context into the man and his complexities.

What is clear throughout both parts of ‘Gazza’ is that someone who loves to be loved – and in searching for that love he has taken the wrong turn on more than one occasion.

In 2022, where NFTs and Cryptocurrencies are king, back in the ’80s and ’90s celebrity was the currency of choice and Gascoigne found himself as a pawn in the center of the red top newspaper circulation war between Rupert Murdoch’s News International (owners of The Sun and News of the World) and Robert Maxwell’s Mirror Group (who owned the Daily Mirror, Sunday Mirror and People).

In a world before Twitter, Instagram, Snapchat and TikTok, the public bought the tabloids to get their celebrity fix, at one point in the 1990s, 15 million people bought The Sun and News of the World every week.

Gascoigne and Sheryl were central to the public’s obsession with celebrity and their private lives soon became splashed across the papers on a regular basis. Their lives were no longer private and they became a public obsession.

Gascoigne’s trust issues are also explored in the documentary. Jane Nottage, who first met Gascoigne when she worked as an England Team Liaison and translator during Italia 90, later became his personal assistant during his time at Lazio. Only for the pair to part and Nottage to write a tell-all book about her time with Gascoigne – which was serialized by a newspaper.

A number of tabloids, who were later convicted of phone hacking, talk in the documentary about the need to get stories about Gascoigne and the lengths they would go to get the headlines. At this point the documentary almost feels it is less about Gascoigne and more about society and the media in the 90s and where Gascoigne is no more than a commodity and yet again no one seemed to be concerned about the person or his welfare.

By this point Gascoigne’s every move seemed to be in the tabloids and the off the field issues were having more and more of an impact on his performances on the pitch – the one place that he found salvation – and this leads to him not being included in the England squad for the World Cup in France in 1998.

The well-publicised fall-out with manager Glenn Hoddle in La Manga and the aftermath is described by teammate Paul Merson, who himself has battled with addiction.

He said: “I walk in the room and Glenn is sitting at the other end of the room and you’d think he’d seen a ghost. The room was everywhere. There were chairs, lampshades, everything was wrecked. Forget about the football, he was in a bad way. He was ill.”

His marriage was over, his international career was finished and Gascoigne’s star was fading, in the end he checked himself into The Priory for the first time to try and address his issues and get help.

And probably the saddest line of the documentary comes from journalist Paul McMullan, who was convicted of phone hacking, he says: “He went to Priory to get away from us. He might have been an alcoholic but we certainly didn’t help. And we didn’t care.

“The guy ends up diagnosed with extreme paranoia, when the reality was he wasn’t paranoid, it was genuinely true. We put the paranoia there.”

And his sister Anne ends the documentary by saying: “What would it have been like if Paul had just been your average footballer? Just playing for an average team and not ever playing for England, just enjoying his job and getting on with it. I wish that had happened. I really do.”

Gascoigne’s troubles since his playing career finished are well documented and not covered in this documentary, instead focusing on the period when his fame was at its highest but focuses on the possible roots of his troubles earlier in his career.

Gazza manages to be both a joyous and nostalgic trip down memory lane with plenty of excellent and unseen archive footage and does an excellent job of portraying one of the most loved and famous footballers of his generation. But is also an uncomfortable and uneasy watch when it addresses the issues of domestic abuse as well as the ‘dark arts’ the tabloid press used at that time.

Speaking about the documentary, Gascoigne said: “It was really emotional watching back everything. Some things are very hard to watch, but others are good memories with my friends.

“Hopefully the viewers will take away from it, the great times I had, there’s a lot that wasn’t good or perfect, but when it comes to the past you can’t change it and have to take the bad with the good things that you’ve done, and the good things I would repeat in a heartbeat.”

FEATURE Paul Gascoigne and Gazzamania: From Italia 90 to Euro 96, how one player changed English football (opens in new tab)