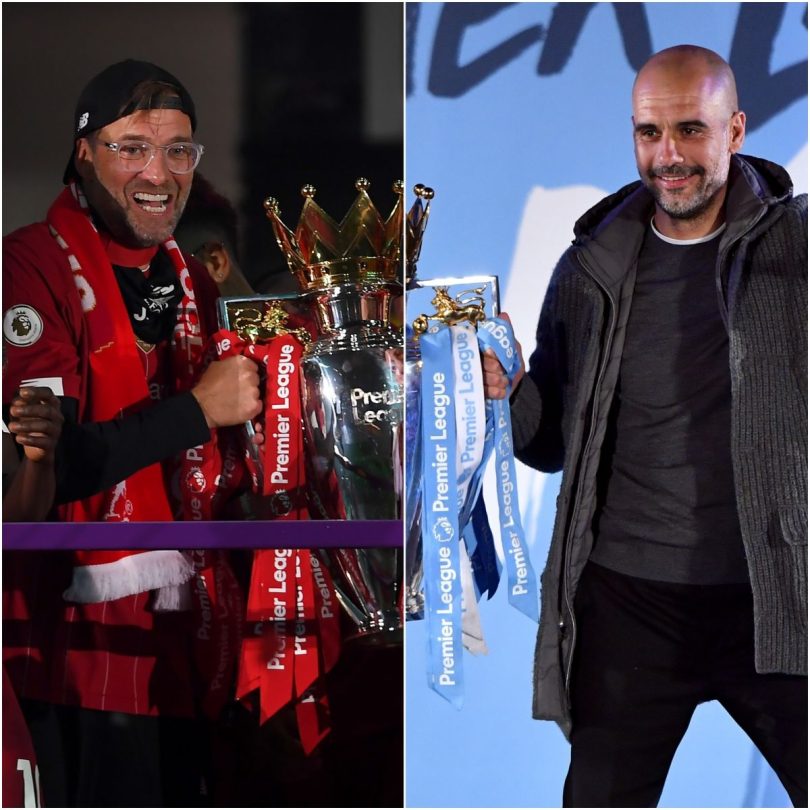 Liverpool defeated Manchester United 4-0 on Tuesday night to go two points clear at the top of the Premier League table, with their title run with Manchester City on the brink.

City have the opportunity to respond immediately to Liverpool’s victory when they take on Brighton on Wednesday night.

They will then host struggling Watford on Saturday, meaning they could be four points clear before Liverpool take the field for Sunday’s derby at home to Everton.

On April 30, Liverpool travel to Newcastle at the start of the lunch hour, much to the annoyance of manager Jurgen Klopp due to their midweek Champions League commitments, which come a day after City’s.

Pep Guardiola’s side take on Leeds at Elland Road five hours later on Saturday and Liverpool also play their rivals in each of the next two scheduled rounds of matches, hosting Tottenham on Saturday 7 May before the City take on Newcastle on Sunday.

The Magpies are one of three common opponents remaining for the two teams with another, Aston Villa, hosting Liverpool on May 10. City currently do not have any midweek games scheduled for that week, but will play at West Ham on Sunday 15 May, with Liverpool in FA. Cup final action that weekend.

The league season concludes on May 22 with City at home to Villa while Liverpool host Wolves. City’s own game away to Bruno Lage’s side has yet to be rearranged, as has Liverpool’s trip to Southampton.

Including Liverpool’s clash with United, each team’s last seven games include four at home and three away.

Of their common opponents, City welcome both Newcastle and Villa to the Etihad Stadium and travel to Wolves, while for Liverpool, that home-away divide is mirrored.

That would seem to favor City, particularly as Wolves have picked up more points away from home (26, ranking fifth in the league) than at Molineux (23). Meanwhile, Newcastle are significantly stronger at St James’ Park, while Villa’s 36 points are split evenly between home and away games.

Taking the table as it stands after the Liverpool-United game, City’s remaining opponents also rank lower: Brighton, Watford, Leeds and West Ham sit 10th, 19th, 16th and 7th respectively for an average position in the league of 13

While Everton are struggling in 17th place, Liverpool are also up against fourth-placed Spurs and 12th-placed Southampton. That’s an average of 11, or 9.5 if you include in the calculation to United, who had been fifth at the kick-off.

City have a friendlier matchup on paper, more favorable home/away split against common opponents and more rest around their Champions League semi-final, while Liverpool have an additional, admittedly welcome, game to play in the FA Cup Final.

Even if the latter ends up being compensated in the Champions League, that will happen after the end of the league season; it would also require Liverpool to lose to Villarreal, while City beat the seemingly more imposing Real Madrid.

The calendar, then, seems stacked in favor of City winning a fourth title in five seasons: can Liverpool defy the odds or will they be bridesmaids again?