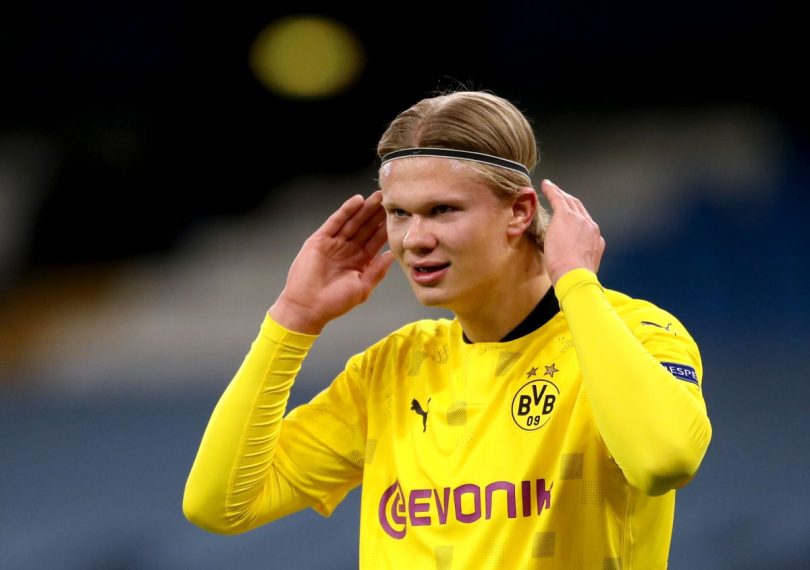 Pep Guardiola has refused to comment on reports that Manchester City are closing in on a deal for Borussia Dortmund striker Erling Haaland.

It has been claimed that City are about to trigger the Norwegian’s £63m release clause after agreeing personal terms, including weekly wages of £500,000 per week, with the 21-year-old’s representatives.

City have long been linked with Haaland, who is one of the most popular properties in the game, but manager Guardiola was not swayed by speculation.

Speaking at a news conference, the City chief said: “There is no answer to your question.”

Pressed further, he added: “There is no answer on these questions. I have another concern and another business on my mind at the moment (than) thinking about what will happen at this club next season”.

City have been short of an outright centre-forward this season following the departure of record goalscorer Sergio Aguero at the end of last season.

They have impressed operating with a false nine this term but, after failing in a high-profile attempt to get Harry Kane out of Tottenham last summer, it is believed they may target a specialist striker again.

Guardiola said: “We don’t know what is going to happen in the future. For many years I never talk about transfer windows, especially when we have amazing things to play this season.

City saw their treble hopes dashed when they were beaten by Liverpool in Saturday’s FA Cup semi-final at Wembley.

Guardiola had made seven changes for the match as his players felt the effects of the previous Wednesday’s tough Champions League game at Atletico Madrid and the Spaniard feels comfortable with his decision.

When asked if he regretted receiving some criticism, he said, “No. I understand the opinions of my fans. They have all my respect to comment but my selection was for many reasons.

Playmaker De Bruyne and midfielder Gundogan are back in contention for Wednesday’s Premier League clash with Brighton at the Etihad Stadium, but full-back Walker is still out.

The English right-back suffered an ankle injury in the clash with Atlético and it is unclear when he will be able to return.

“For tomorrow it is not available,” Guardiola said. “We’ll see how he reacts with the ankle.”

Center back Ruben Dias, an unused substitute in the last two games, is set to return for the first time since March 1, but he’s in no hurry.

Guardiola said: “Rubén trained very well but he has been out for seven weeks, not playing a single minute. When you recover you need tempo. He’s smart, he’s a guy who knows his body. We are beyond delighted that he is back.”