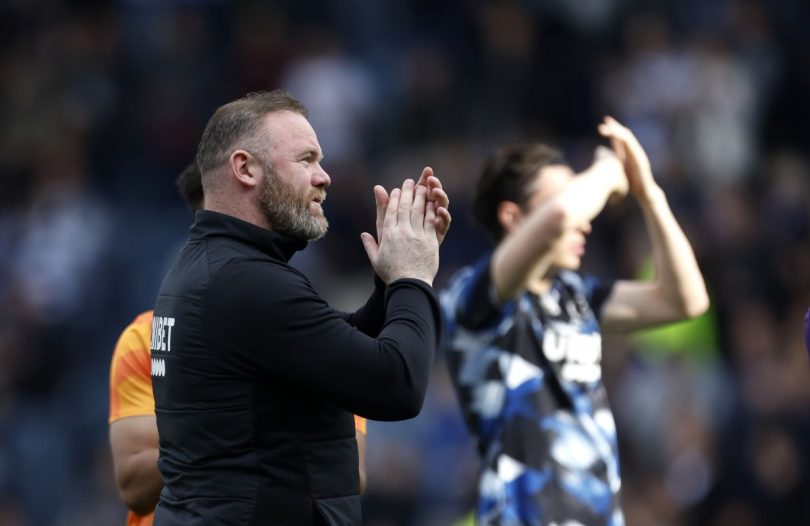 Wayne Rooney is “thrilled” by the challenge of leading Derby back to the Championship, but insists both his and the club’s future rests on the completion of an acquisition.

The Rams, deducted 21 points this season after going into administration, were relegated to League One with three games remaining after losing 1-0 to QPR.

The loss left them 10 points behind Reading, who came from 4-1 down to earn a last-gasp draw with Swansea.

Rooney said: “I am disappointed, sad, angry, upset but ultimately proud of the players, staff and fans, who have been excellent.

“I told the players after the game: ‘When you walk out of that locker room, walk out with your head held high. Don’t drop your head.’

Accounting infractions under previous owner Mel Morris added another nine points to the standard 12-point administrative penalty, and without the combined deduction, Rooney’s side would be comfortably safe at 52 points.

Rooney added: “We know we would be safe without the penalties we’ve had. This is where the previous owner left us and we have been trying to pick up the pieces of that and trying to come up with something really special. We have come close and we have failed to do so.

I’m sure Mr. Morris watched the game at home. He himself will be disappointed, because we have tried to clean up the mess he has left us in as best we can.”

Derby’s joint administrators named Chris Kirchner as the preferred bidder for the club and entered a period of exclusivity intended to end a lengthy takeover process.

And Rooney emphasized the importance of a deal being completed, and soon.

“It has to happen quickly,” he said.

“I’m not stupid. I know that the Premier League teams and the top clubs in the Championship are looking for some of our players.

“We really have a good foundation. The bases are there for a very good team. I need to be able to add to that squad.

“I know which players I want to bring into League One and I need to be able to move quickly to make sure we have the best chance of getting back up.

“I need to be able to bring the right players in for League One to make sure this club moves forward again.

“I’m excited to put my teeth in and bring in the players that I want to bring in and try to develop them and try to be a successful team.

“I want to rebuild this club. But the acquisition has to happen. If not, I am very insecure about my future and the future of the club. This takeover has to happen fast.”

QPR secured victory thanks to a late goal from Luke Amos and manager Mark Warburton believes Rooney deserves credit for the job he has done.

“He’s probably had more managerial experience in these nine to 12 months than most of the experience in nine or 12 years,” Warburton said.

“All credit to Wayne and his staff for keeping a team together, keeping the confidence there and producing the level of performances they have at home and away. They deserve so much credit for that.

“There is so much going on that has been out of their control, but they have maintained their standards throughout.”

On the game, Warburton admitted: “We won ugly. They were the better team in the second half.

“They were fresh from a good win against Fulham, full of adrenaline and they had to win to stay. We knew what we were up against.

“In the first half we had some chances but we didn’t take them and then in the second half we were the second best in terms of having the ball.

“But they were always going to send bodies forward and take risks, so we could hurt them at the counter, and that was the case.”