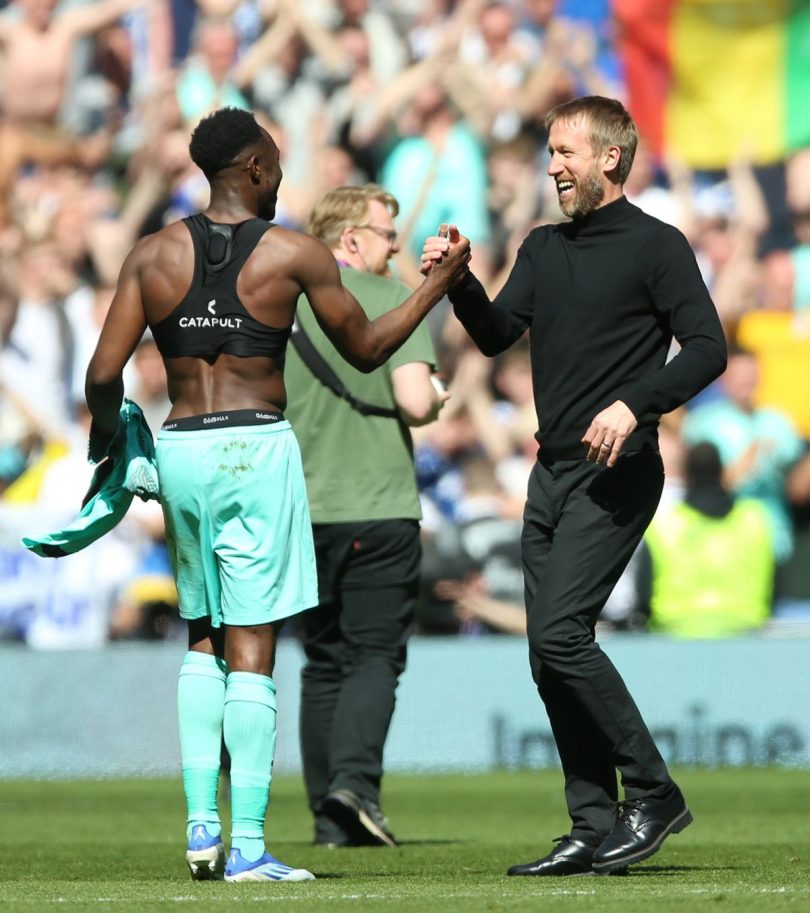 Brighton boss Graham Potter believes Saturday’s victory at Tottenham was his best performance in his three years at the club, but has told his players they will need to be even better at Manchester City.

A week after the Seagulls beat Arsenal at the Emirates Stadium, they repeated the trick in north London thanks to Leandro Trossard’s 90th-minute strike.

The fixtures don’t get any easier, however, as Brighton heads to Manchester to take on Pep Guardiola’s Premier League leaders on Wednesday night.

“I was very proud of the players,” Potter said. “It was a very good performance, probably one of the best, if not the best, in my time at the club.

“You have to have that level of performance if you are going to get a result at Tottenham. Historically, it’s not easy for us to go there and get a win.

“The players gave it their all on the day, and that gives you the opportunity to get a result. Our supporters were brilliant and it was a very good day for the club.

“It gives you confidence, I guess. We have played good games this season, I think we have taken a step forward.

“But the past is the past and you have to start again, against an absolutely fantastic team. I would say we will have to be even better than we were against the Spurs. That is the challenge.

“It’s very rare that you get the opportunity to play against the best in the sport, so while it’s an incredible challenge, it’s also exciting. We will go there and do our best.”

City host the Seagulls after their grueling Champions League struggle with Atletico Madrid and 3-2 FA Cup semi-final loss to Liverpool.

But Potter added: “I don’t think there’s any good time to play against them, in terms of who they are as a team.

“In the game over the weekend you saw his qualities. You admire them both in defeat and when they are winning games.

“They had two tough games against Atletico Madrid in the Champions League, you can’t imagine how tough that is, between two games with Liverpool.

“To come back from 3-0 down at halftime and play the second half like they did, the way they performed was very, very impressive.”

Brighton will be without key midfielder Yves Bissouma for the next two games due to suspension after he became the first Premier League player to earn 10 bookings this season.

“We’ve played games without Yves before and we’ve done well as a team,” Potter said.

“We have to find that solution. But the group is in a very good place and eager to play and help the team.

“That’s the exciting part of the next few days, finding the right ones and putting them on.”