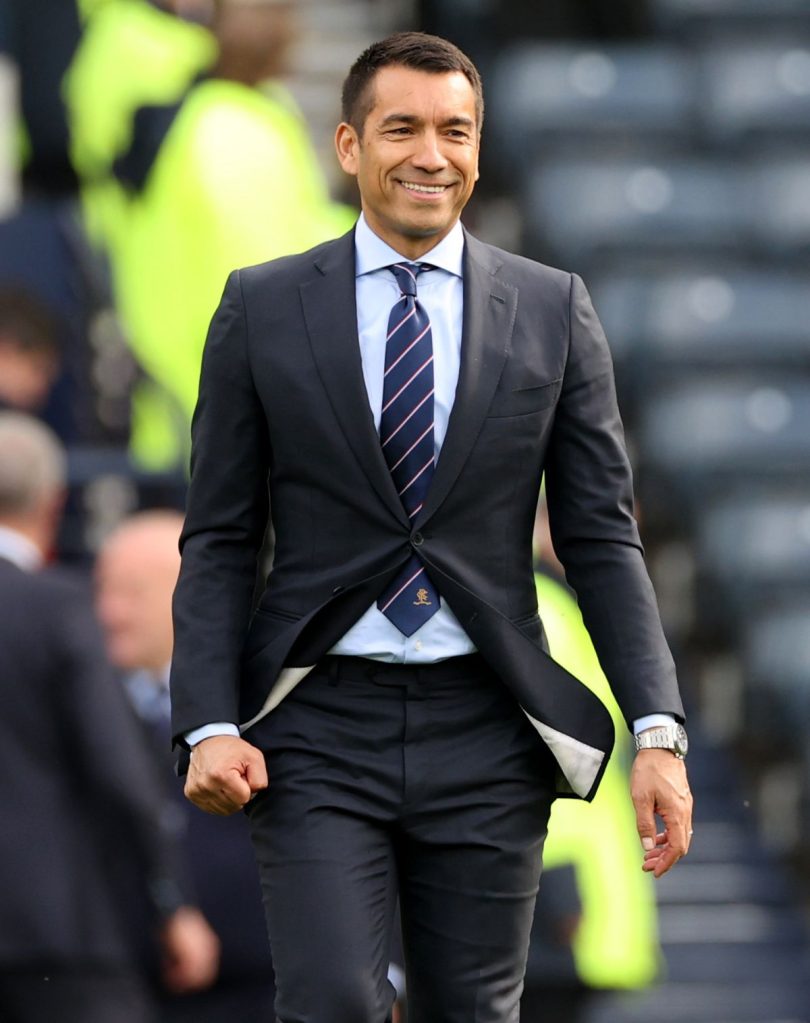 Giovanni van Bronckhorst praised his Rangers team’s “phenomenal” character in coming back from a goal down to beat Celtic 2-1 at Hampden Park to reach the Scottish Cup final.

Parkhead’s side took the lead against the general course of play in the 64th minute through left back Greg Taylor, but Gers’s substitute Scott Arfield equalized in the 78th minute to take the game into extra time for the second time in four days for the Light Blues. , having beaten Braga in 120 minutes in the Europa League quarterfinals at Ibrox on Thursday.

In the 114th minute, when the match seemed headed for penalties, Celtic defender Carl Starfelt and Gers substitute Fashion Sakala contested Calvin Bassey’s cross with the ball going into the net – it looked like an own goal. – and Rangers will now play Hearts. in the final on May 21.

“It was a very proud moment for me to see my team play like this,” said the Gers manager, who revealed that Aaron Ramsey had to leave shortly before half-time with a hamstring injury.

“We had to go deeper after a demanding game against Braga. But I think today our character was phenomenal, especially as we knew Celtic were coming at us fresh. The boys did great.

“In the first half we created good scoring chances. But when we got the goal against we knew we had to dig even deeper. The substitutions had quite a positive impact on the team: fresh legs.

“We controlled the game after that. You know when you’re playing a semi-final and it goes into extra time, the players get tired and make more mistakes.

“We know that when we scored in the second period of extra time it was a vital moment. Lucky for us, we scored the winning goal with Sakala.”

Van Bronckhorst believes the victory gives Rangers an incentive to go on and win the cup for the first time since 2009 as they continue their quest for Celtic at the top of the league with the Hoops holding a six-point lead with five games remaining.

The Dutchman said: “Of course it has been an excellent week for us to win against Braga and win today and reach the cup final.

“The momentum this week has been perfect. We have a lot of games to play in the next few weeks, so it gives us a lot of confidence.

“But every match you have to start all over again. We are going to use this week to freshen up, recover and rest and make sure everyone is ready for the final weeks of the season.”

Arfield had missed two chances against Braga after coming off the bench, one of them when he hit the bar from six meters, and Van Bronckhorst acknowledged the midfielder’s redemption.

He said: “Scott is always trying to score. On Thursday he missed a very good opportunity, but he is always a player who can get into those spaces and try to score.

“Today he did it perfectly. I’m very happy for him, but I’m happy for all of us because we scored the draw”.

On Ramsey’s injury, van Bronckhorst said: “He had a hamstring problem. He didn’t look too good. We will have to value him, but of course it is a setback for us that he is out.

“I do not know for how long. We just have to assess him tomorrow and see where he is.”

Ange Postecoglou is looking for Celtic to use the disappointment of defeat to boost their bid for the title.

Hoops boss said: “We have had to be resilient all year and this is another challenge for us.

“But regardless of what happened today, we have five games to focus on winning the league, starting next week.

“We need to make sure we use this disappointment to fuel our efforts in this next series of games.”