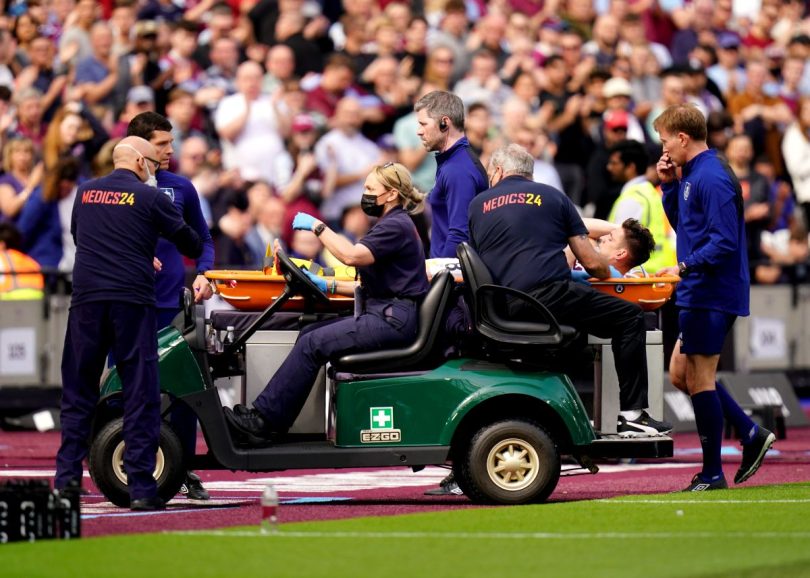 Burnley struggled to a point in their first game since Sean Dyche’s shock departure, but the 1-1 draw at West Ham came at a cost as Ashley Westwood suffered a horrific injury.

The midfielder’s leg seemed to buckle under him as he challenged Nikola Vlasic for the ball.

A stretcher and oxygen were immediately brought in, while Vlasic and Aaron Cresswell, who was closest to the incident, appeared distraught and had to be comforted by their teammates.

Wout Weghorst opened the scoring moments later, but Maxwel Cornet’s awful missed penalty proved pivotal as West Ham, backed by their Europa League heroics in Lyon on Thursday, rallied to snatch a point from him through Tomas Soucek.

Relegation-threatened Burnley, with Under-23 manager Mike Jackson in charge following Dyche’s sacking, are now three points behind Everton in 17th.

West Ham, not so fresh after their Europa League efforts at Lyon on Thursday night, nearly opened the scoring after 10 minutes following a well-worked corner routine.

Declan Rice sent a short corner kick from Manuel Lanzini to Jarrod Bowen, whose initial shot was blocked before his next shot was deflected wide by Nick Pope.

Moments later, Cresswell’s well-hit volley was cleared off the line by James Tarkowski, with Bowen, sliding inside, unable to convert the rebound.

There was then a nine-minute delay while Westwood was treated, but three minutes later Burnley took the lead, Weghorst towering over Soucek to head in on the rebound after Jay Rodriguez’s header bounced off the crossbar.

Celebrations were understandably muted, with Weghorst pointing to the bench in support of his injured teammate.

Burnley should have doubled their lead after Cornet chased down a long ball from Josh Brownhill and raced towards goal.

The Ivory Coast winger was brought down by Hammers goalkeeper Lukasz Fabianski but, after getting up, saved the penalty – Burnley’s first penalty of the season – horribly wide.

Rice sent Lanzini down the left, but Soucek couldn’t convert his cross to the far post.

However, Soucek prevailed in the 74th minute when he shouldered in Lanzini’s free kick.

West Ham came closest to a winner but were denied three times by Pope, who knocked down a ferocious pass from Antonio and produced another great save to deflect Issa Diop’s header before denying Antonio again in a one-on-one.