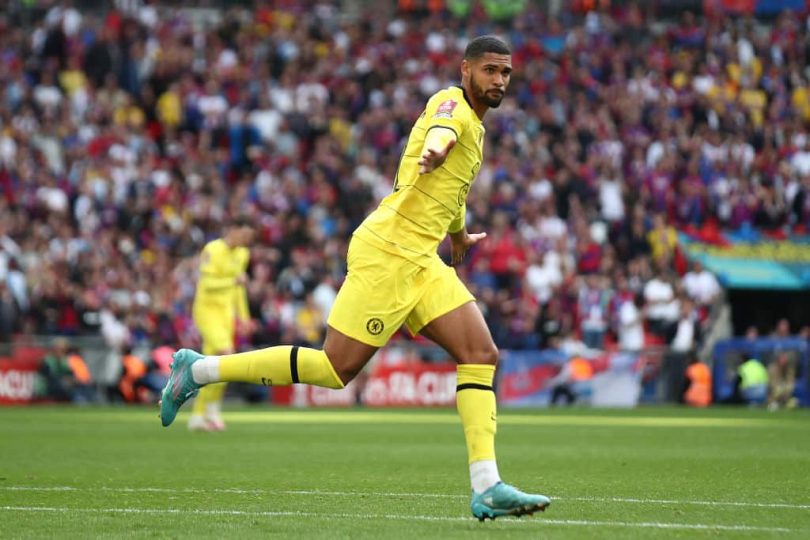 Saeed’s confrontation saw Crystal Palace and Chelsea at Wembley, with the winner preparing to face Liverpool in the tournament final next month.

Head coach Thomas Tuchel’s side entered the match as an obvious candidate, and when all was said and done, the West London side proved too much for Patrick Vieira and his co-stars.

Chelsea struggled to create a lot on the day, but they finally broke the deadlock when Kai Havertz’s cross fell to Ruben Loftus-Cheek, who had his effort past Jack Butland.

Mason Mount then made it 2-0 after 76 minutes, and so the tie ended.

Edouard Mendy (7.5) – A brilliant save to deny Kouyate in the first half.

Rhys James (6.5) – was put in right-back position to help break Zaha’s pace and manage to help keep the Ivorian calm.

Andreas Christensen (7) – His pace compared to Thiago Silva allowed Chelsea to push their defensive line even higher. The Dane also made a number of excellent interceptions, blocks, and tackles.

Antonio Rudiger (6.5) – Another strong showing from the German.

Cesar Azpilicueta (6.5) – He struggled to present an attacking threat to Reece James on the right side but his pressure was decisive against Loftus-Cheek. He also got the ball back in the run-up to Mount’s shot.

Jorginho (5) – Was too slow to distribute the ball, but played a good pass to Havertz before the opening goal. After 78 minutes.

Mateo Kovacic (5) – He was tasked with neutralizing Ize’s threat and did a decent job before an injury forced him to retire less than half an hour later.

Marcos Alonso (5) – Very ineffective going forward. He didn’t have much to do on the other end.

Mason Mount (7) – He struggled to feed a Werner who made a number of kicks in the back. Well done creating an opportunity for himself before scoring after 75 minutes.

Kai Havertz (5) – He managed one shot in the first half, which was far from the goal. He was booked for diving when he would likely have had a good chance if he stayed on his feet. Not the best German show.

Timo Werner (7.5) – Made a decent half cross in the first half. Jebel helped in second for Chelsea and should have had a second pass but Lukaku upset his streaks.

Ruben Loftus-Cheek (7.5) – A great ball to Werner at the start of the second half that came to nothing. He opened the scoring with a resounding shot in the 65th minute. He made a number of dangerous kicks that led to Chelsea’s chances.

N’Golo Kante (5) – He helped Chelsea go through the game without any problems.

Romelu Lukaku (2) – Barely touched the ball as he ran away from guiding him for a distant opportunity when it seemed hard to miss.

Hakim Ziyech (3) – He did a little note-taking.

Thiago Silva (5) – In the last eight minutes to help follow the match, which Chelsea did.

Jack Butland (5) – Couldn’t do much about the Loftus-Cheek goal, which took a slight deviation.

Joachim Andersen (4) – He could have done a better job trying to cut Werner’s pass for Mount Out. Then he missed an open goal in the 78th minute.

Mark Joyehy (6.5) – Made a number of major interceptions and interventions. He was unlucky to see his set of Havertz’s cross fall straight to Loftus-Cheek.

Terrick Mitchell (6) – Solid defensively most of the match. Perhaps it would have been better to close Havertz in the opening game for Chelsea.

Cheihou Kouyate (6.5) – Qasr Hadd’s best chance in the first half, which was saved by Mindy. Then he had a big chance from a corner kick an hour later but his effort was poor.

James MacArthur (5.5) – dominant midfield in the first 45. Less influential in the second half but perhaps unlucky to take off.

Jeffrey Schlupp (3) – A largely ineffective display before it was taken off after 71 minutes.

Eberechi Eze (4) – Fails to create anything noticeable in the first half. A little better at 45 seconds but not what Patrick Vieira would have wanted.

Jean-Philippe Mateta (3) – It was quiet in the first half and then took off after 55 minutes.

Jordan Ayew (3) – Like Mateta, Ayew got very little time on the ball.

Christian Benteke (not available) – He had only a few touches.

Michael Ulis (6) – He tried to create a number of chances when he came in but none of them resulted in a goal.

Ruben Loftus-Cheek, Chelsea player: “too late [the goal]! It’s been a tough road due to injuries and loan to find my level again, but I’ve always believed in myself and always wanted to play for Chelsea. I played a lot this season, I’m happy.

“I was just thinking about hitting it, I think it took some deflection but I’m going to accept it! I had to be ready to step in. It looked a little slow in the first half so I just wanted to bring in some energy.

“The reason I’m still here is my brain through all the injuries. I still believe in myself and have said for many years my time will come.

“We want them back, as simple as that. It was a great match in the League Cup final and it could have gone in any direction.”

What is the right time between Chelsea and Crystal Palace?