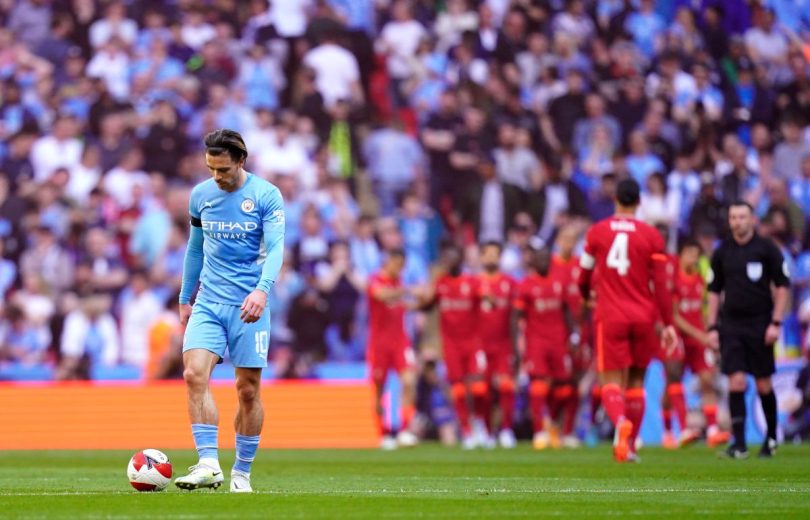 City saw their treble hopes dashed when they lost 3-2 to quadruple-chasing Liverpool on Saturday in a thrilling semi-final at Wembley.

The Grealish midfielder did not want to dwell on defeat, however, and immediately turned his attention to the two competitions City can still win this season.

The England international said: “You just go in and look at the talent and experience we have in that dressing room. I don’t think anyone else in the league has a locker room like this.

“Our performances, the competitions we are in and where we are in the league speak for themselves.

“We just have to get up, go again and hopefully by the end of the season we will have (won) the Premier League and the Champions League.”

City paid the price for a slow start when Ibrahima Konate steered Liverpool to an early lead before an error by substitute goalkeeper Zack Steffen gifted Sadio Mane a second goal.

Mane then volleyed the Reds’ third on the stroke of half-time to leave City facing a heavy defeat.

Grealish clipped one after the break and Bernardo Silva set up a grandstand finish with another on a late rally, but Liverpool held on.

It seemed that City’s intense recent schedule, which included a grueling Champions League draw against Atletico Madrid and last week’s thrilling draw with Liverpool, had caught up with them.

But Grealish said: “I’m not going to sit here and make excuses. I just think we came out slow. That was it.

Very disappointed not to make it to the final, much better of us in the second half, that’s what we need to focus on to get to the final stage of the season. Thanks to everyone who traveled to Wembley today! pic.twitter.com/KRt7MzKveU— Nathan Ake (@NathanAke) April 16, 2022

“We didn’t have the first half we wanted, but we went into halftime and the coach made some changes. I think we were much better for it, but I think in the end it was too little, too late.”

City leads Liverpool by a point at the top of the Premier League and faces Real Madrid in the Champions League semi-finals.

They are back in action as they host Brighton in midweek.

“We still have to play the Champions League and the Premier League,” Grealish said. “So we have to get up and get back to normal by Wednesday.”