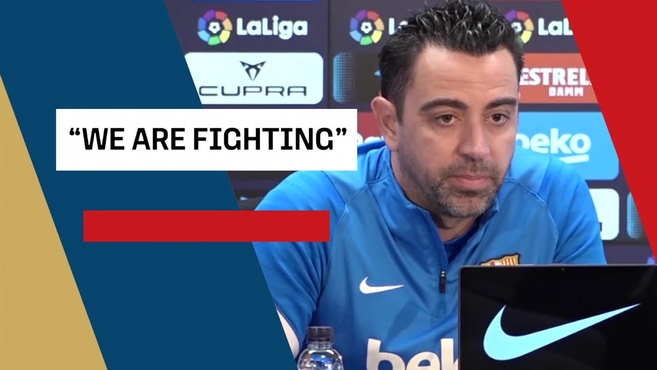 XAvi Hernandez claimed he was embarrassed even before the bus arrived at the Camp Nou ahead of their match against Eintracht Frankfurt.

Thousands of German fans managed to get tickets for Thursday’s duel in Catalonia and occupied large parts of the stands, making it look as if the visitors were playing at home.

“When I left the hotel, I saw that something was wrong,” Xavi said at the press conference.

“They threw everything at us. You feel robbed at home. It didn’t look like we were playing at home.

“It all started badly. Then [came] the fine. It was a fateful night in every way. It started and ended badly.

“It’s a hard blow, they wiped us out from European League. We were hoping to win it and go straight to the Champions League [group stage] And we didn’t succeed. It’s a blow.”

There has been talk about whether Barcelona can combine attractive football play with winning titles, but Xavi insists the team’s philosophy will not change.

“In this way, we won five Champions League titles,” he added.

“Submitted by Johan Cruyff. It has paid off and has results. We have to improve it, but not falter. We have to believe, correct and improve. We will not change our DNA to lose a match or a title.”

Barcelona face Cadiz at home on Monday, as Xavi made it clear that his team must improve some aspects of their game.

“You get better by doing,” Chaffee noted.

“We wanted to win the title, and we are still fighting for the league. We are there [in the race], despite its complexity. I’m proud of the way they competed on Thursday, but we didn’t play well. I showed them our faults.”