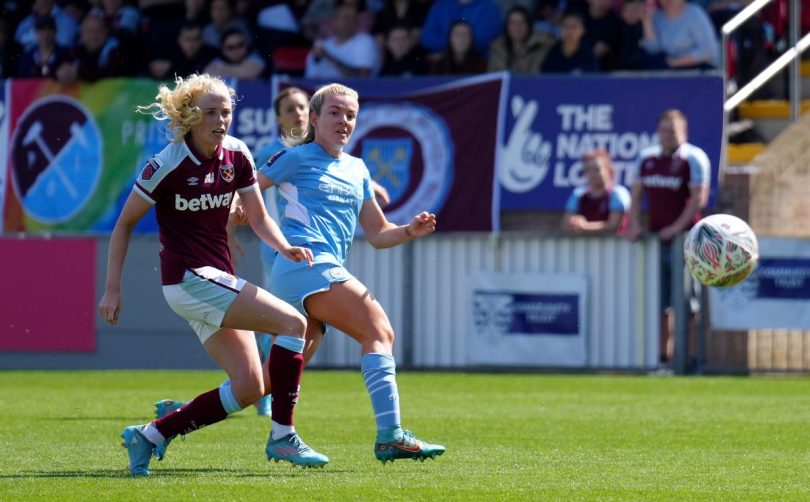 Hemp’s goal in the 67th minute, the 50th of his club career, and a second in stoppage time cemented a 4-1 semi-final win at Dagenham after Ellen White and Chloe Kelly scored before half-time, with Lisa Evans vouching for the stubborn hosts. .

The three-time winners will face either Arsenal or Chelsea at Wembley, with the top two from the Women’s Super League battling it out for the remaining spot on Sunday afternoon.

The visitors took the lead with 21 minutes remaining when White reacted first to dive for a header, with goalkeeper Mackenzie Arnold desperately crossing her goal after Keira Walsh’s impressive 25-yard piledriver backed off the crossbar.

White saw an equally impressive second effort disallowed after referees ruled that Lucy Bronze had not kept the ball in play before crossing, and Hemp, who had been well directed up to that point, fired in as City began to turn the screw.

They got their reward eight minutes before the break when Kelly raced into a reckless pass from Gilly Flaherty through his own penalty area to beat Arnold and make it 2-0.

However, Evans gave the Hammers hope three minutes before the break when, after Alex Greenwood was dispossessed midway, he took advantage of the indecisiveness of the City defense to round Ellie Roebuck and reduce the deficit.

White saw a 52nd-minute header correctly ruled out for offside as the visitors looked to seal the game, but West Ham fought back determinedly to give themselves a chance.

They might have been level when Evans slipped Tameka Yallop behind the visitors’ defence, but she stabbed his attempt wide as Roebuck shut it down and Hemp dashed their hopes when he cleverly turned before firing a shot past Arnold.

Katerina Svitkova forced a late save from Roebuck, but Arnold had to deflect substitute Filippa Angeldahl’s fierce shot to the crossbar and was beaten for the fourth time in death as Hemp completed a fine afternoon.