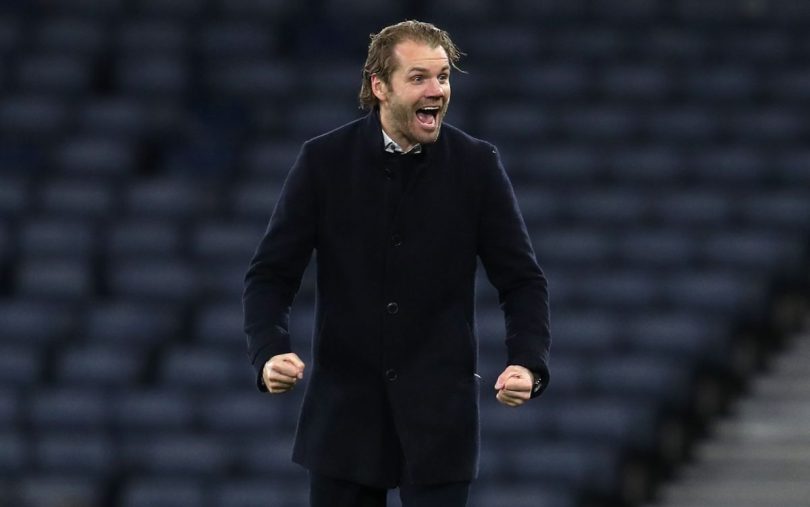 Robbie Neilson urged Hearts to have a great season by bringing the Scottish Cup back to Tynecastle next month.

The Jambos secured a place in the final against either Celtic or Rangers with a hard-fought 2–1 victory over the 10-man Hibernian at Hampden Park.

Easter Road midfielder Joe Newell was sent off in the 64th minute by referee John Beaton for picking up the second of two yellow cards for a foul on Peter Haring, but although Hibs kept pressing for an equaliser, the Tynecastle side held on to reach to their third Scottish Cup. final in four years and ensure that they would be in some form of European football until Christmas next season.

Neilson, whose team beat Hibs 3-1 at Tynecastle in the league last week, said: “It’s huge for the club.

“We won last week with 20 minutes in which we could enjoy it.

“Now we have four or five months until the next derby, so we can enjoy the period.

“We have a few days off and then we have five league games that we want to win to prepare for the Scottish Cup final.

“It has been a good season. Today he does really well. Can we do great in the final?

“When you play derbies it’s about winning them, we’ve done that back to back at home and now at Hampden.

“I think we started well, we got a two-goal lead and then we lost a goal quickly, it put us off the game.

“Hibs were the best team after that, even when they were down to 10 men. We had periods where we kept it up, but we weren’t aggressive enough to kill the game and even until the last minute we almost hung on.”

Neilson will ensure that European football money next season is spent wisely.

“It will make a difference,” said the Jambos coach, who will “wait and see” the extent of Craig Halkett’s injury after he was carried off the field on a stretcher following a tackle by James Scott.

“It’s guaranteed money, but we have to be careful how we spend that money, we don’t want to throw it all away.

“We have to gradually build the club over the next three, four, five years to achieve consistent European football and try to fight for the title.”

Hibs boss Shaun Maloney admitted he had asked his team for a more physical approach following their loss at Tynecastle last week and had had no complaints about Newell being sacked, saying: “I could understand.”

He said: “We had to do it. There was a physicality and strength at Hearts last weekend that we had to match.

“I asked the players to play on that edge. Hearts were physically dominant last week but not today.

“I think my team’s performance was excellent, as good as it has been in the three or four months I’ve been here.

“I couldn’t be more proud of them and what they gave me, going down to 10 men I thought we were the most dominant team.

“Extremely disappointed for the fans. What you’ve seen from the support at the end is something I haven’t really seen before in a big derby loss.

“I have never seen a supporter give a reception to a team that has lost in a derby like the one we had at the end.”