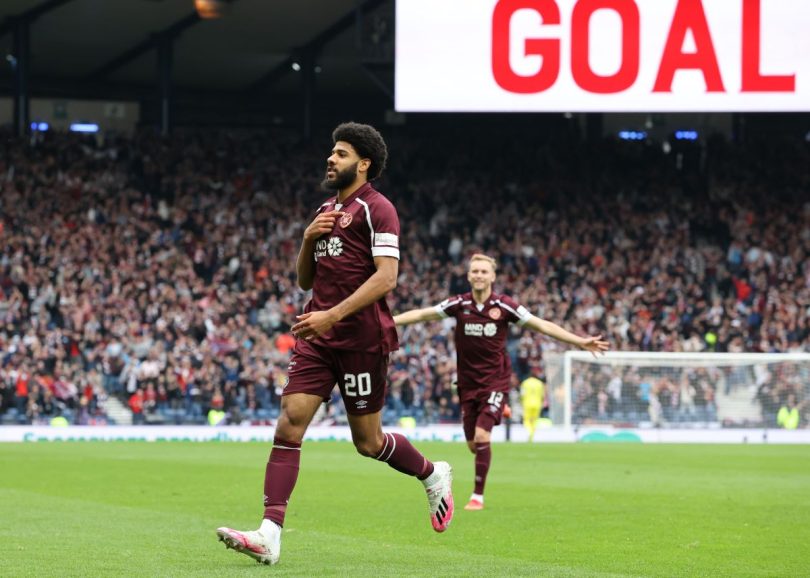 All the goals came in a six-minute period in the first half, with 10-man Hibs unable to find an equalizer after Chris Cadden answered expert strikes from Ellis Simms and Stephen Kingsley.

Here are five things we learned from the Hampden action.

Having claimed third place in the league and with the top two Celtic and Rangers in the other semi-final, the win saw Hearts seal the European favorites out of the Champions League. Hearts will go straight to the Europa League play-offs and even defeat will send them to the Europa Conference League groups. It will be the first time in 18 years that the club have reached the group stage in Europe and the first time in 15 years that a Scottish club other than Celtic and Rangers have, from the Aberdeen run to the round of 32 of the UEFA Cup. .

The multi-million pound European boost could help Hearts strengthen their dominance in the Edinburgh derby. It is now six derbies unbeaten for Hearts, who beat Hibs at the same stage in the delayed 2020 Scottish Cup after being relegated to the Championship. Hibernian manager Shaun Maloney admitted he had instructed his side to be more physical after the previous weekend’s 3-1 defeat at Tynecastle, which sent his team to a bottom six finish, but to times they lacked an edge. Many Hibs fans gave their side a standing ovation afterwards, but the five empty seating blocks, set against a packed Hearts finish, told a story of the clubs’ current relative strength.

Hibernian’s bad discipline is costing them

Joe Newell took his manager’s instructions too far. Having been booked early on for a foul on Barrie McKay, the midfielder walked a fine disciplinary line before challenging Peter Haring 20 minutes into the second half and receiving a second yellow card. Hibs had started the second half well and continued to push for an equaliser, but his chances were hampered by the experienced player’s rushing tackle. Hibs have the most red cards of any team in Scotland this season, with Newell receiving his eleventh dismissal and his second.

The three teams that slipped into the top six of the Premiership last weekend now have a better chance of sealing a European place, with Hibernian out of the cup. Two of the three teams, who are divided by one point, will enter the Europa Conference League qualifiers, with fourth place sealing a place in the third qualifying round, two ties from the group stage.

Craig Halkett’s luck is out

The centre-back joined the Scotland squad last month but could face a cup final contention on 21 May, as well as the June international schedule, which could add five Scotland caps. The former Livingston player appeared to catch his studs on the turf as he contested the ball with James Scott and it was immediately clear he was in trouble before he was taken away on a stretcher. Halkett returned to the field of play after the final whistle on crutches and with a protective boot on his ankle. He faces a few days of anxiety before the injury subsides and the damage is assessed.