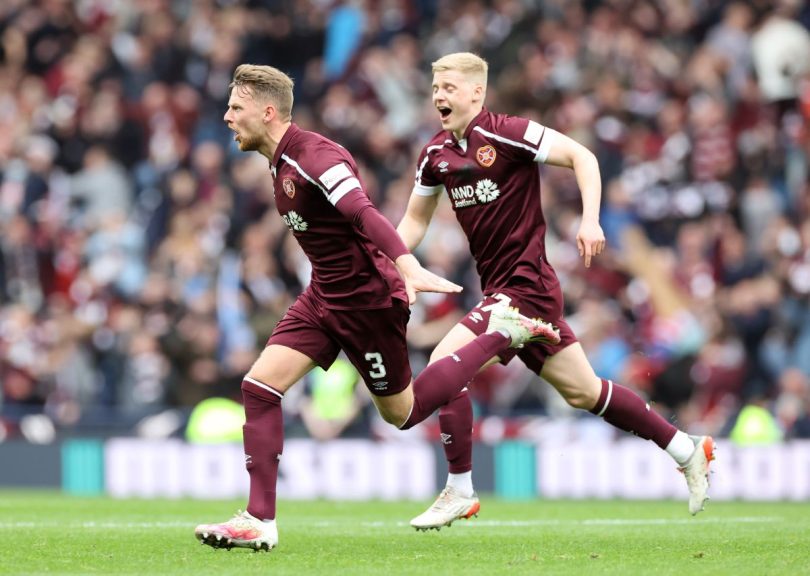 The Jambos were leading through an Ellis Simms goal after 16 minutes and were awarded a free kick some 30 yards from goal five minutes later.

It was too far away for Kingsley to hit directly on goal, so he went one-two with Liam Boyce before flicking the ball over Hibs goalkeeper Matt Macey.

Chris Cadden immediately reduced the deficit and Hibs, despite Joe Newell being sent off in the 64th minute, pushed for an equaliser, but Hearts held on to reach their third Scottish Cup final in four years, also ensuring that I would play some form of European football until Christmas next season.

Jambos boss Robbie Neilson claimed the set piece was due to his backroom staff – Paul Gallagher, Gordon Forrest and Lee McCulloch – but Kingsley said: “I didn’t practice it once.

“I was meant to be on the left side, on the Barrie McKay side, for him.

“We had practiced it during the week for him.

“It was something that we felt pretty safe with, but when I was on the right side, and it was too far away for my preferred distance, we talked amongst ourselves and brought Boycey in and got him on my side and thankfully it couldn’t have worked better.

“Before today, St Mirren’s free kick was probably the best this season, but where it was and who it was against, it was a huge moment in the game.

“It was disappointing to lose that goal so quickly afterwards, but it ended up being the goal that got us into the final. I am absolutely delighted.”