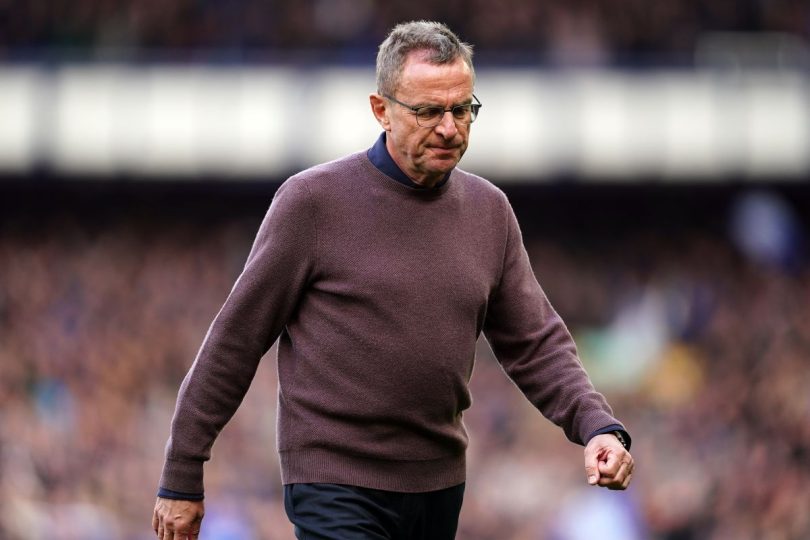 Manchester United caretaker manager Ralf Rangnick has insisted fans have the right to express their opinions ahead of an expected protest against club ownership ahead of Saturday’s Premier League game against Norwich.

Group 1958 have announced plans for fans to gather at Stretford’s Tollgate on Saturday morning before marching on to Old Trafford. They plan to remain out of the stadium until the 17th minute of the game, marking one minute for each year of ownership of the Glazer family.

There was a heavy security presence around United’s Carrington training ground on Friday after around 30 fans gathered with an anti-Glazer banner before the gathering was dispersed by police.

“We know that soccer is a game of passion and emotion,” Rangnick said. “I think we can all understand that our fans are disappointed both by our position in the table and by the performance we showed against Everton.

“But I think our supporters are some of the best in England, if not the best, and as long as they protest peacefully and continue to support the team in the stadium, I think they have a right to express their opinion. I can understand that they were disappointed.”

Regarding Friday’s protest, a club spokesman said: “There was a small, peaceful protest today outside Carrington training ground. We respect the opinions of fans and remain committed to strengthening our commitment to them.”

On May 2 last year, Liverpool’s visit to Old Trafford was canceled after a planned peaceful protest, estimated at 1,000 people, escalated, with fans storming the stadium and causing damage.

Feelings against the Glazer family have risen again since the failed European Super League project, but feelings of frustration have also risen amid the struggles on United’s pitch.

Last week’s 1-0 defeat at Everton, coupled with Tottenham’s 4-1 win at Aston Villa, has left United six points from the top four with seven games to play, although Rangnick insisted the The team had improved since he replaced Ole Gunnar. Solskjaer at the end of November.

“I think we did it,” he said. “We had moments, situations and matches and moments where we played well, where we showed that the team could play at a higher level.

“If I can think of the games we played against Crystal Palace, West Ham, Tottenham, in Leeds, until the 70th minute against Aston Villa, we had quite a few games that we played well as a team.

“What we couldn’t do is do it sustainably and over a longer period of time. I’m disappointed about that, I thought we could have played sustainably at a higher level. I’m not happy about that for sure, but this is what we will try to do for the rest of the season.”

They will likely have to do without England left-back Luke Shaw, who is now expected to miss the rest of the season following an operation to remove metal pins from his leg.

Rangnick said last week that he expected the 26-year-old to miss two or three weeks, but the procedure has turned out to be more complicated than expected.

“It looks like he’s going to be out for at least another four or five weeks,” Rangnick said. “It will be difficult for him to be available for the remaining seven games.”

Rangnick also confirmed that Fred, Scott McTominay, Raphael Varane and Edinson Cavani will also miss Saturday’s game, with concerns that they will also be out against Liverpool on Tuesday night.

“Five players will still be missing for tomorrow, and some of them also for the game against Liverpool,” he said.