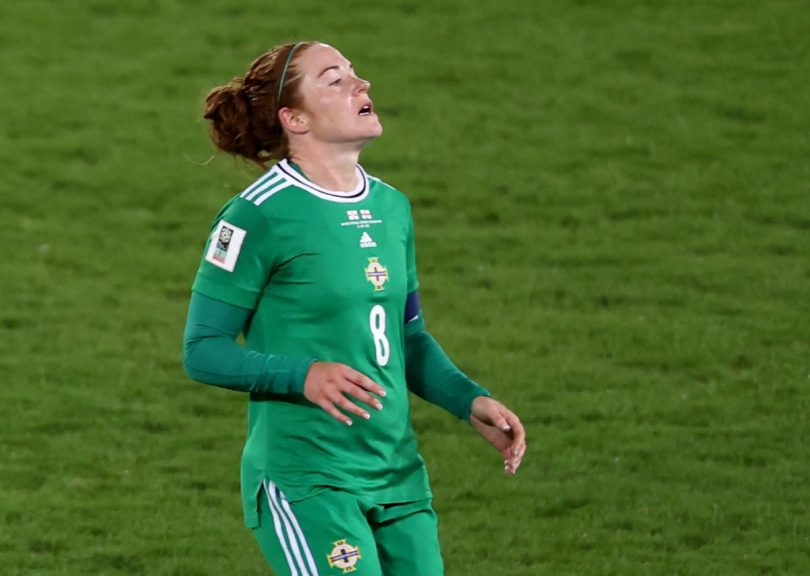 Northern Ireland Women’s captain Marissa Callaghan has spoken out in support of manager Kenny Shiels after he caused controversy this week by saying “women are more emotional than men”.

Shiels was speaking after Northern Ireland’s 5-0 World Cup qualifier defeat at home to England on Tuesday night as he explained why he felt his team too often conceded goals in quick succession.

The comments drew criticism from pundits, former players and politicians, overshadowing a night in which a record crowd of 15,348 traveled to Windsor Park to watch the match.

Shiels apologized for his comments on Wednesday.

A day later, Callaghan issued a statement on social media saying he was speaking for the team as a whole.

“In light of recent events, we collectively support our manager,” Callaghan wrote.

“We feel like your interview was in relation to a meeting we had as a team where we discussed conceding goals in quick succession and emotions were one of the many things we discussed.

“Since Kenny took charge of our national team three years ago, I have always publicly congratulated him on how he is able to bring out the best in his players individually and collectively. He is a man of integrity who cares about us as a family.”

Shiels have been very successful since taking charge of Northern Ireland in 2019, with the former Kilmarnock boss guiding them to qualification for this summer’s European Championship and winning 10 of his 18 games in charge.

But two of their five defeats came in the last week as defeats to Austria and England effectively ended hopes of reaching next year’s World Cup.

On Tuesday, Northern Ireland conceded four goals in 27 second-half minutes as their resistance against England collapsed, prompting Shiels to say: “I’m sure you’ve noticed if you look at the patterns: when a team concede one goal, conceding a second in a very, very short space of time.

“[It happens] across the entire spectrum of women’s play, because girls and women are more emotional than men. So, they don’t take a goal that goes in very well.”

But Callaghan, who trains as well as plays for Cliftonville Ladies, credited Shiels with instilling the confidence in Northern Ireland players that has led to their recent success.

“Kenny has transformed the game here in Northern Ireland because he knows how to get the best out of his players. We have qualified for a major tournament because he transformed our mindset,” the 36-year-old added.

“We look forward to the coming months as we continue to prepare for the European Championship this summer.

“Selling the National Stadium has been a pivotal moment for the game here in NI and we as players and staff will continue as a team to help grow the game and inspire the next generation of young players and fans.”