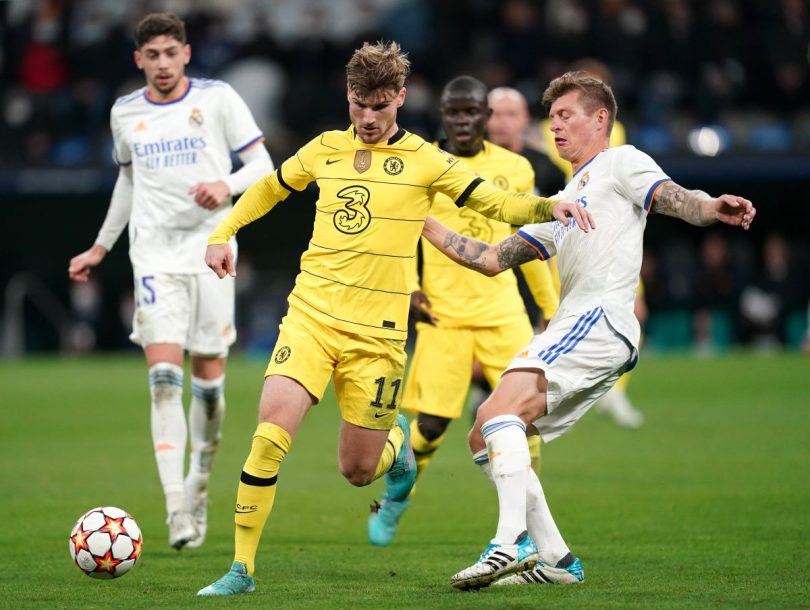 Timo Werner admitted thinking his goal at the Bernabéu stadium had beaten Real Madrid in the second leg of Tuesday’s Champions League quarter-final.

Chelsea prevailed 3-2 in Madrid but exited the competition 5-4 on aggregate after extra time.

Werner scored midway through the second half to put Chelsea into a 3-0 lead, and the Blues shook off Marcos Alonso’s disallowed goal in style.

German striker Werner’s goal put Chelsea 4-3 up on aggregate, after Madrid cruised to a dominant 3-1 win at Stamford Bridge in the first leg.

However, just as the Blues were looking to wrap up a remarkable comeback, Luka Modric conjured a majestic pass for Rodrygo’s volley.

Karim Benzema headed home in extra time and Chelsea’s quest for the miracle in Madrid proved in vain, leaving the Blues on the verge of relinquishing their Champions League title.

“When I celebrated I thought ‘this is it’,” Werner told the Chelsea club’s official website.

“We could have scored earlier to make it 3-0 but the referees didn’t give it to us. It’s a point that can be talked about, but when I checked I thought ‘we’re done with this’.

“We hardly gave Madrid chances but in the end we have to say that the goals they scored were very good.

“Coming back after a 3-1 home loss was very good for us, we had everything we needed with 3-0 up, we had a chance to go through.

“There was a moment in regulation time when we weren’t like we were in the whole match and Madrid have the quality to mark you and they showed it in the 3-1.

Mason Mount and Toni Rudiger scored before Alonso saw a fine shot disallowed for handball after a VAR review.

Ruben Loftus-Cheek excelled in a hybrid role of full-back and midfield, with Reece James equally impressive at right-back.

Blues boss Thomas Tuchel stayed on to pay tribute to his players for taking his bid for an unlikely comeback to the absolute limit.

“Madrid didn’t create much at Stamford Bridge, but they took every opportunity and converted it,” said Tuchel.

“You have to reduce your number of errors and we couldn’t do it with two legs.

“But in both legs, and for sure in Madrid, we deserved to go through.

“However, I have no regrets: these are the kind of losses you can take with pride.

“The players fulfilled a plan. We were never shy to point out that this is the most important thing, how we live up to a tactic and how lively we play in a structure.

“This is where the credit goes to the players, they were very disciplined with the ball and very active.

“I am very happy, this is the way to go.

“If we have this kind of effort, we’re a special team, and if we don’t, we can lose to anybody.”

Real Madrid boss Carlo Ancelotti insisted Madrid now have as much claim to the Champions League crown as any of the other contenders.

“We show everyone that we can be competitive until the end.

“He is a very young player and he is important to us.

“He needs a bit of time to mingle with the others, but I’m very happy with him.”