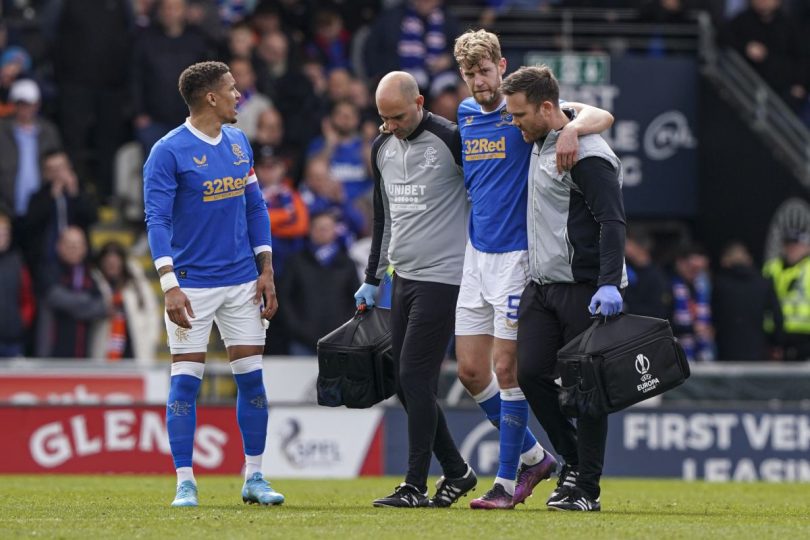 Rangers defender Filip Helander will be out for the rest of the season with a foot injury.

The Swede had to come off in the first half of Sunday’s cinch Premiership victory over St Mirren at Paisley.

Boss Giovanni Van Bronckhorst is unsure if surgery is required but confirmed that Helander, who is not in Govan’s Europa League squad, will not return until the summer.

“Filip’s injury is not good, so we don’t have him for the rest of the season,” said the Dutchman.

“I don’t know if he needs surgery yet, but he has a foot injury, an injury he also had on his other foot, so all I can say right now is we’ll make sure he’s ready for pre. -season next season.”

While Helander would not have been available for the Europa League quarter-final second leg clash with Braga at Ibrox on Thursday night, Rangers face Celtic in the Scottish Cup semi-final at Hampden Park on Sunday and they enter the game six points behind their Old Firm rivals at the top of the Premiership with five games remaining.

Van Bronckhorst revealed that midfielder John Lundstram, who walked away with a knock against the Buddies, will train ahead of the Braga game, in which Rangers will try to overcome a 1-0 first-leg deficit in Portugal last week.

He said: “John is training today so hopefully he will pass training and be available for tomorrow.”

Defender Calvin Bassey and midfielder Ryan Jack missed the trip to Paisley but are back on the team and available to play.

Van Bronckhorst is looking for a strong performance from his side to overcome Braga and reach the semi-finals, where they will face either Atalanta or RB Leipzig, who drew 1-1 in their first leg.

“We knew that he was a very good rival. We had a result that we can top tomorrow,” Van Bronckhorst added.

“When you play against an opponent, you have a better view of the team and the individual players. We have prepared well for tomorrow again.

“It’s a great game that needs a great performance from everyone, but I’m confident we can achieve a good result.

“Obviously the first game is different from the second game.

“We know what the task is, we know what areas we can improve, so for us it’s just to make sure we’re playing the way we can, at our best, because you need that at this stage in Europe of course. We will be ready for tomorrow.”