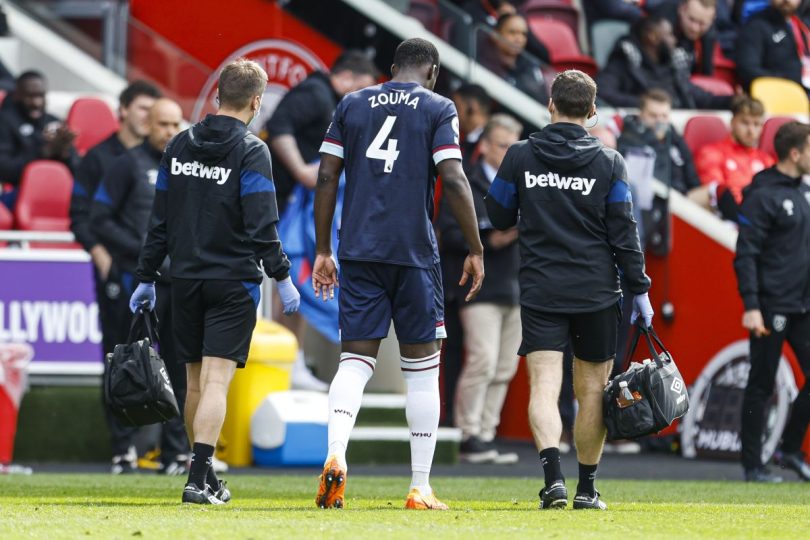 West Ham are eagerly awaiting to find out the extent of Kurt Zouma’s injury ahead of one of the biggest nights in the club’s recent history.

French defender Zouma limped off Sunday’s 2-0 loss at Brentford after spraining his ankle.

The 27-year-old faces a race to be fit for Thursday night’s Europa League second leg in Lyon, where the Hammers will attempt to reach their first European semi-final in 46 years.

Manager David Moyes said: “We don’t know how bad it is. We will have it checked. Going out is not a good sign, but I hope it’s not so bad.”

The Czech international revealed that he had been playing through the injury all season until he underwent surgery in February.

“I was fighting from the beginning of the season. It started at Euro 2020 but I didn’t pay attention because I thought it would happen,” Coufal said.

“Then it was more and more serious and I kept playing.

“I worked very hard for six weeks. The first prediction was to come back after six weeks and after five weeks he was ready to play.

“The medical team did an amazing job. I need to thank them because they took care of me like their children.

“I also have to thank my wife because for five days after surgery I was like a third child. I could not do anything. I could only lie on the sofa, it was unpleasant because it was very painful.

The Hammers’ European efforts caught up with them in Brentford, but they need to recover quickly when they head to France with their quarter-final tie level at 1-1.

“It was a tough match,” added Coufal. “The boys did an incredible job on Thursday against Lyon and it is acceptable that they were a bit tired. It is difficult to play as many games as we have this season.

“I enjoy playing twice a week because I feel like a new player, so I have a lot of confidence.

“We will see what happens on Thursday with Lyon. We are going to do everything possible to reach the semi-final.”

Second-half goals from Bryan Mbeumo and Ivan Toney lifted Brentford 12 points out of the relegation zone.

And Toney feels the Bees have done enough to secure another season in the Premier League.

“With the players we have on the team, I feel like we have more than enough to stay in the league.”