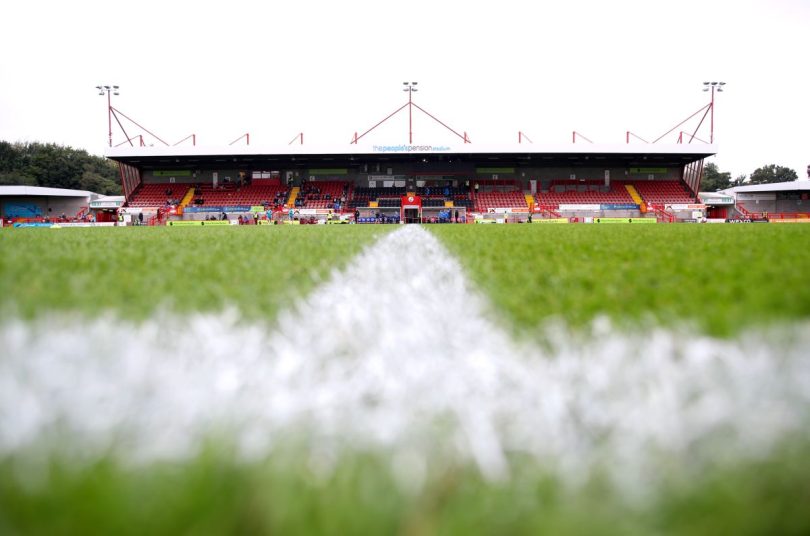 Crawley fans are wary of their club becoming “an experiment gone wrong” following a takeover by crypto investors last week.

WAGMI United announced last Thursday that it had bought a majority stake in the League Two club, after an offer to buy Bradford was rejected last year.

The owners are understood to have met all the requirements of the English Football League, but there is apprehension among Crawley supporters and more widely in football regarding the takeover, with cryptocurrency an unregulated market in the UK.

WAGMI founders Preston Johnson and Eben Smith promised Crawley fans promotion to League One within two seasons or stand for re-election as club directors if they fail.

Confirming the acquisition, WAGMI said they wanted to “reimagine how professional sports teams are owned and operated.”

Those comments have excited and worried Crawley fans in equal measure.

“It’s great that they want to experiment, and we hope we go on a wonderful journey and get promotions and a lot of cup races and be successful,” Sam Jordan, chairman of the club’s Supporters Alliance, told the PA news agency. .

“What I would say initially is that they have been quite open and transparent. We know who they are, we’ve seen their faces, they’re active on social media, they want to talk to the fans, all of those things are positive.

“The biggest fear for me, and I’m not very interested in cryptocurrencies or NFTs, is where the money will come from if we don’t succeed with the budgets they’re looking to spend and their experiment doesn’t pan out. ?

“What does that look like to make sure everyone gets paid and we can retain our status in the Football League?

“It’s fantastic that they want to come in and be promoted in two years. However, I think that when you buy a club everyone says that. So is that going to happen?

“They are buying a small club compared to Bradford, they are two totally different clubs in terms of potential.

“I am excited about the potential, but there is also an apprehension that if it doesn’t pan out, what it could mean for the future of the club.

The new owners are understood to have provided future financial information to the EFL setting out how they will finance the club for the remainder of this season and for the 2022-23 campaign as one of the requirements of the takeover, as well as proving the source. and adequacy of funds in conventional currency.

WAGMI has committed to “unprecedented” transparency and accountability for supporters, and is scheduled to hold an online Q&A session this week.

Jordan, who said the Alliance had contacted the new owners with a view to meeting with them the next time they were in the country at the end of the month, hopes that includes representation of the supporters on the new board of directors.

“We are interested in talking to them because it is our football club,” he added.

“The coaches and the players come and go, but the fans are always going to be there and it is very important that we are comfortable.

“We don’t have the independent regulator yet, so as fans we didn’t know who was buying our football club until the transaction was made.

“The fans are the soul of a football club. So they should definitely be very involved in daily or weekly conversations with owners about what the future looks like.

“We would like to have a seat on the board, which can convey the opinions of the fans. It will be one of the questions that we ask ourselves, if we can have that.”