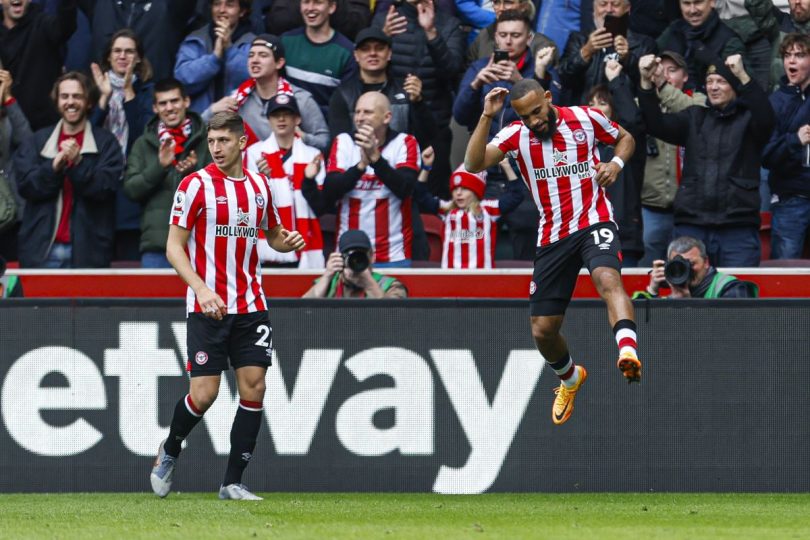 Two second-half goals lifted the Bees 12 points out of the Premier League relegation zone after a Sunday afternoon stroll in the west London sun.

Mbeumo lashed out for the first goal after being pestered by Toney and then returned the favor for his strike partner when Toney scored his 14th goal of the season.

For West Ham it was another dent in their hopes of finishing in the top four, and they too took a potentially massive hit with Thursday night’s Europa League second leg against Lyon in mind when defender Kurt Zouma was forced. to limp out of the action. half of the first half.

Zouma had been kicked hard in the ankle by Christian Norgaard five minutes earlier and was apparently unable to shake off the blow.

The France international, still roundly booed by opposition fans after his embarrassing cat kick video, left the pitch to a chorus of ‘put him down’ from Bees supporters.

Brentford were still buoyed by last weekend’s convincing 4-1 win over Chelsea and Mbeumo made the first attempt of the match when he headed in Rico Henry’s cross to Lukasz Fabianski.

The spirited striker further tested West Ham’s Polish goalkeeper with a ferocious shot at the near post.

Then, when Fabianski hit a Christian Eriksen corner that threatened to go wide, Mbeumo lobbed the rebound over the crossbar.

Eriksen grew into the match as the first half wore on and his free kick was headed just over his own crossbar by Vladimir Coufal before Fabianski saved the Dane’s low, skidding shot.

Mbeumo got his reward two minutes into the second half when he latched onto a clever move from Toney and fired a fierce angled shot past Fabianski.

It was the French striker’s fourth goal of the season and first since December.

Moyes sent Said Benrahma to face his former club, but before the Algerian could get a meaningful touch, Brentford doubled their lead with a deft move.

Yoane Wissa sent Henry down the left and the full-back’s cross was deflected on goal by Mbeumo for Toney to head in the simplest of shots to close out a well-deserved victory.