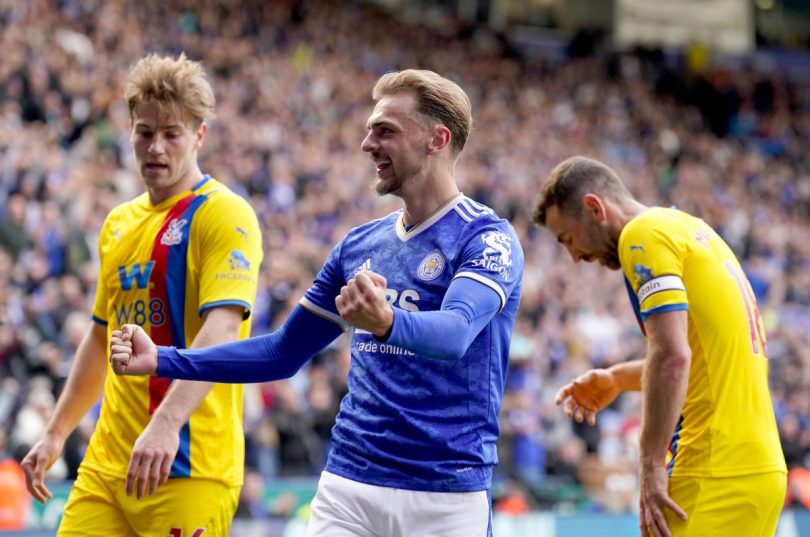 The midfielder’s first Premier League goal came after a sublime assist for Ademola Lookman’s opening goal to give the Foxes perfect preparation for Thursday’s trip to PSV.

They go to Eindhoven for the Europa Conference League quarter-final second leg tied 0-0, but have momentum after just two defeats in their last 10 outings.

Kasper Schmeichel saved two penalties from Wilfried Zaha, after VAR ordered a replay, only for the striker to head in on the rebound of the second to give Palace hope in the second half.

But a leveler never came and the Foxes move above Palace to ninth in the Premier League. The Eagles saw a seven-game unbeaten run come to an end, taking them to Wembley for next week’s FA Cup semi-final with Chelsea.

But they took the reorganization lightly, even if they had to survive two scares before taking full control.

The first came when Zaha missed the goal after a good pass from Jeff Schlupp, while the second came after 18 minutes when Zaha put in past Jean-Philippe Mateta.

The striker tricked past Caglar Soyuncu and Schmeichel’s excellent low save deflected his shot before Joachim Andersen headed the resulting corner wide.

However, despite the chances, there was no rhythm to the game and both sides took time to find their rhythm.

James Justin stepped in to pinch Marc Guehi’s pass to Zaha and Tielemans found Dewsbury-Hall, whose excellent pass picked up Lookman to cut inside Andersen and past Guaita.

It then got better for the Foxes just before the break when they doubled their lead. Guehi allowed Justin’s hopeful ball under his foot and Patson Daka seized the opportunity.

He crossed for Dewsbury-Hall on the edge of the box and the midfielder designed the space by holding off Cheikhou Koyate before brilliantly scoring his third goal of the season.

After the break, the hosts picked up where they left off when Guaita deflected Tielemans’ effort with more than 35 seconds remaining.

But they were handed a lifeline in the 64th minute when Tielemans brought down Jordan Ayew in the box.

Zaha’s tremendous penalty was saved low to his left by Schmeichel only for VAR to order a replay because the goalkeeper invaded.

Once again Zaha stepped forward and produced a lousy penalty shot which was saved by Schmeichel but the ball bounced nicely for the striker to head in on the rebound.

Palace, however, were unable to conjure up a leveller despite a couple of scrambles and Leicester saw them out of the game.