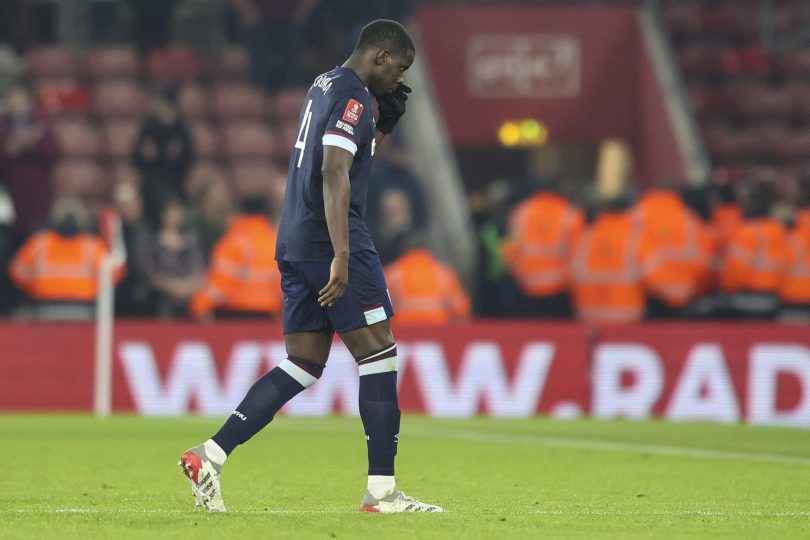 West Ham United manager David Moyes has given an update on Kurt Zouma’s well-being, over his team’s meeting with Brentford.

At first glance, the Frenchman appeared to have picked up a hamstring problem, which ultimately left Moyes with little choice but to pull Zuma out, and offer Issa Diop in his place.

Zuma received a knockout and was replaced by Issa Diop. #bryoho 0-0 (29) pic.twitter.com/9Dl389KzLO

Speaking to the media on the back of the action approaching in west London on Sunday, it was no surprise when the topic of his star defender’s well-being was brought up to the Hammers manager.

Moyes went on to confirm that Zuma had, in fact, “twisted his ankle”, albeit amid hopes that “it’s not so bad”.

Moyes: “Kurt flexed his ankle. We don’t know how bad it is yet. I hope it isn’t so bad.” #WHUFC

Zuma’s interest in fitness was of course just the tip of the iceberg when it came to a totally miserable West Ham afternoon.

It came as Irons, undoubtedly keen to capitalize on mistakes by Arsenal, Manchester United and Wolves, was put in a position by Thomas Frank Brentford.

Goals by Brian Mbiomo and Evan Toni proved the difference on the day as West Ham saw any remaining hopes of a late Champions League push brought to what is likely to be a definitive end.

The bees control the Brentford Community Stadium as they face West Ham.